This section details the police motorcycle radios used by the California Highway Patrol from approximately 1938 to the present.

The first motorcycle radios used by the CHP were one-way, i.e. receive-only, on 1674 Kilocycles AM and were first installed in approximately 1937-38. The entire statewide system dispatched on this one frequency through at least 1950. The CHP's official history states that dispatching changed to VHF in 1950, however it is believed that some or most areas still simulcast on the low frequency AM channel at least through 1952, until all motorcycle and mobile units could be changed over.

These motorcycle receivers were the RCA MI-7815 and are shown below. They used octal based tubes and were similar to the GE receivers made at the same time, which fit into the Harley Davidson side carrier boxes in the same way. The antenna was initially a small semi-circular screen suspended over the rear fender on porcelain stand-off insulators, which in appearance looks not unlike a a small tennis racquet without its handle. Later shipments changed the antenna to a short steel whip as was more conventionally used in later years.

These radios were reasonably trouble-free, but still required at least weekly maintenance.

In 1942 and 43, a number of one way receivers were supplied by the Air Associates Company of Los Angeles to equip motorcycles added since the original RCA purchase and as part of the war emergency.  Air Associates also supplied an experimental two way motorcycle radio for evaluation, some time in the mid-1940's, however for some reason it was not successful and no further sets were purchased.   Unfortunately, while I have the manual for the Air Associates one-way set, any photos or other evidence of them seems to have been lost to history.

Throughout the war and up to 1950, the motorcycles remained primarily one-way other than some evaluation installations and a few Vetric radios purchased in the 1949-52 period.  It is believed that the CHP was always evaluating different styles and brands of motorcycle radios during the 1938-1950 period.  What models are shown here are the ones receiving the actual purchase orders for quantity shipments.

Shown below is the RCA receiver mounted on a motorcycle.  Note that the cycle shown here is not a CHP version as the siren and toolbox were on opposite sides for CHP.  It is shown for the detail of the radio and mounts only. 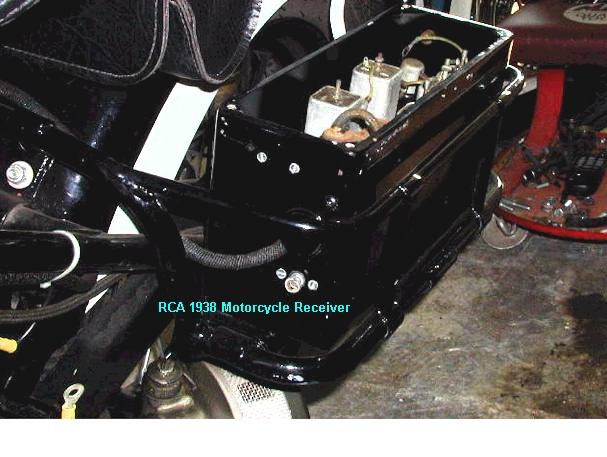 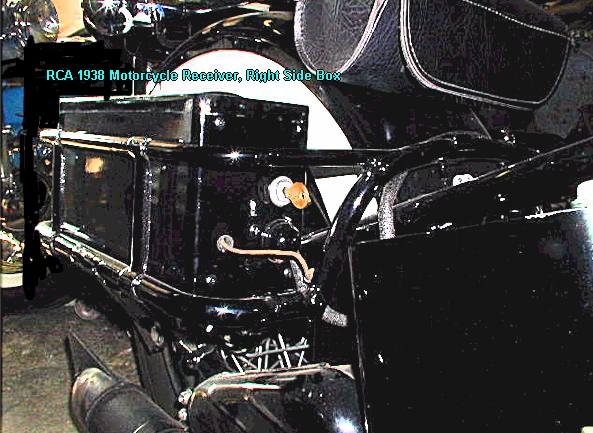 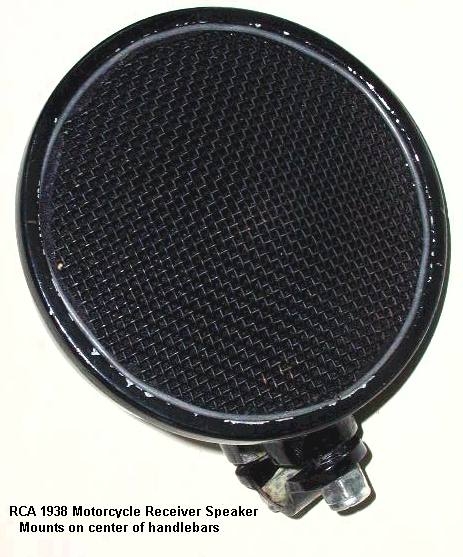 Here is a view of an actual CHP motorcycle circa 1938 with the first generation radio installation.  Note the lack of a third lamp as other cycles in later years have.  Presumably there were minor variations from cycle to cycle, just as there are on the BMW units in service today. 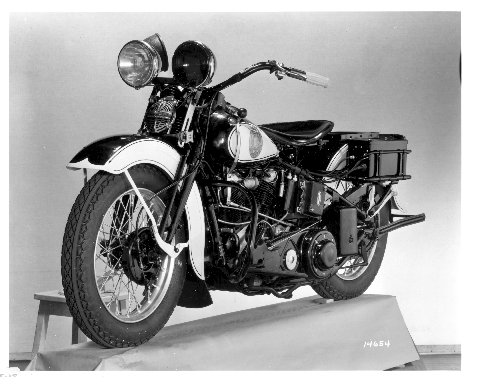 Shown below is a May, 1939 photo of Sergeant Andrew Martin of the Salinas, California CHP office (amateur callsign W6UC)  showing his radio equipped motorcycle, outside a lettuce field near Salinas.  This radio featured the first generation screen antenna as the cycle above.  Amateur radio enthusiasts will notice the license plate, which is what Andrew is pointing at.  Unfortunately the speaker for the radio cannot be seen because of the shadow in the photo around the handlebars. This was the best resolution I could get from a small photo in a magazine from 1939. 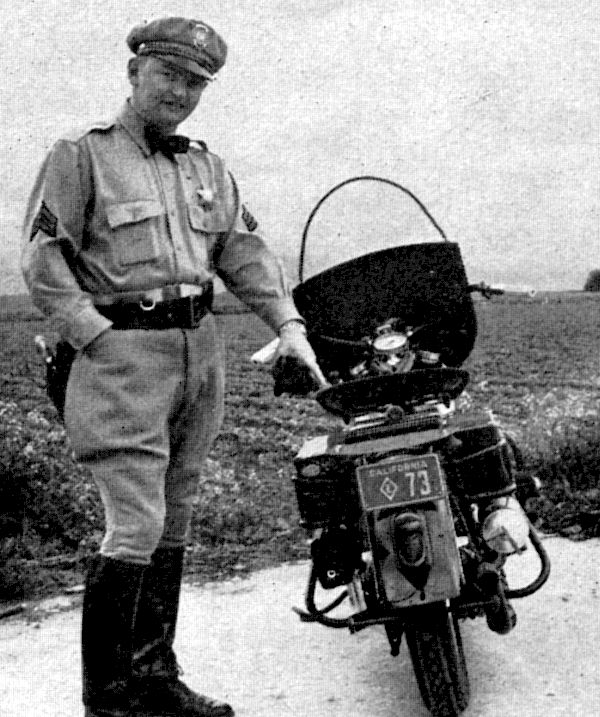 Below is a factory photo of the standard Harley Davidson screen antenna, later replaced with a conventional whip assembly.  It is my understanding that the assembly shown below is the setup sold by Harley Davidson directly rather than RCA.  The actual screen antenna used by CHP seems to be very slightly different.  Note that these antennas were in an almost constant state of experimentation and modification.  Another in-house design seen on some CHP cycles prior to 1943 was a stiff wire loop extending over the tail of the rear fender (see photo with the girls below.)  By the end of WWII the antennas appear to have been standardized to the short steel whip. 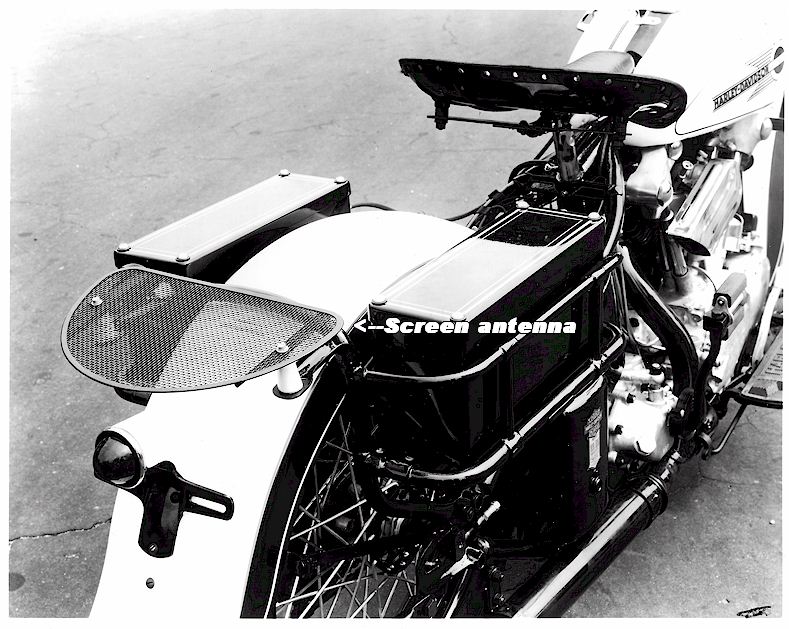 Shown below is a 1946 photo showing a motorcycle officer from the Newhall, California office.  Notice that the antenna is now the whip style, and the third lamp. 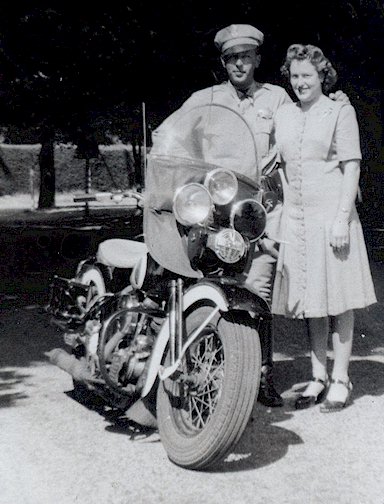 And another... Note the "just for CHP" tool box mounted over the front fender behind the horn, making it look like a spittoon facing forward in this "trick of the light" view! 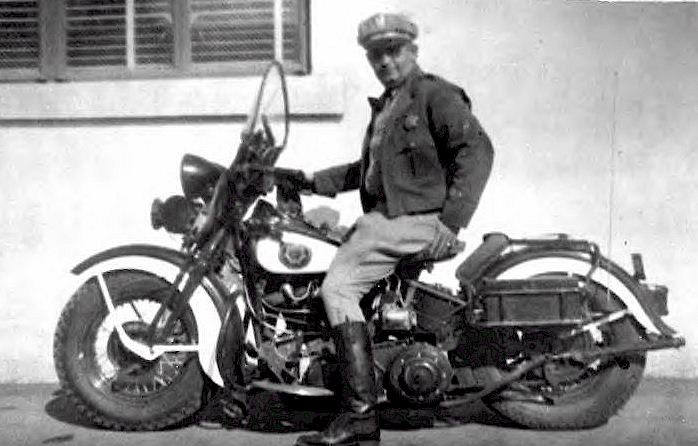 And another...  Notice in this undated photo below that the antenna is now a simple piece of wire bent over the rear fender.  This is a shop-made antenna created by CHP technicians for some reason., possibly wartime material shortages.  There is also what appears to be a shop-made storage box of some kind under the radio carrier, another example of customization done after delivery.  Eventually there were bulletins sent out by CHP headquarters directing officers and local divisions to stop attaching "accessories" to the radio boxes, because the shock mounts were not designed to handle any additional weight.  "Unapproved" accessories also contributed to de-stabilizing the motorcycle at high speed, although in the example below the rider alone was probably sufficient to destabilize the motorcycle at most speeds. 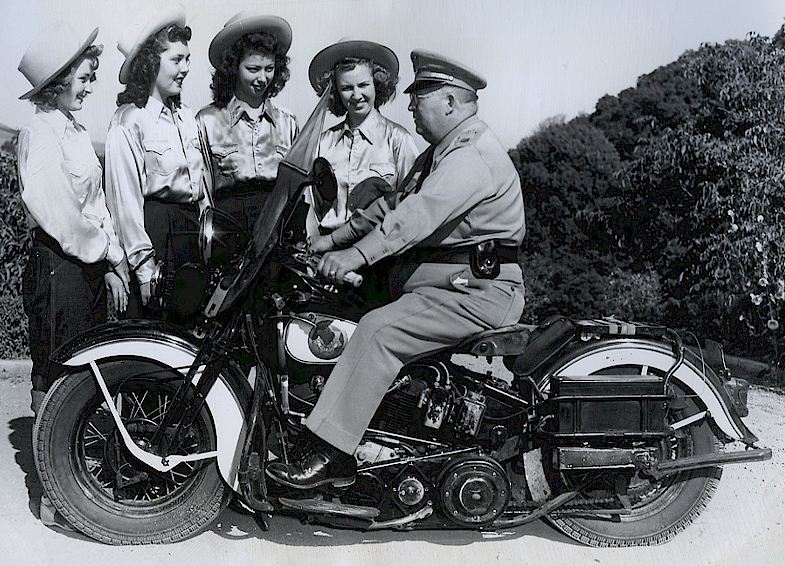 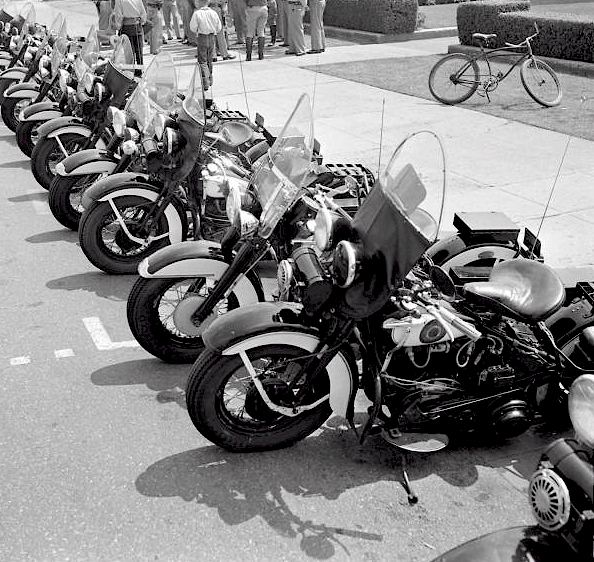 During the period of approximately 1950-51, the CHP seems to have purchased a quantity of Vetric motorcycle radios, made by the Vetric Company of Alhambra, California, for evaluation. Sometime in the mid or late 1940's, Vetric had been purchased and absorbed by Link Radio of New York City, although Link seems to have kept the Vetric plant intact and continued to use the Vetric name on motorcycle radios, as a subsidiary company. CHP switched to FM for dispatching throughout 1950, so presumably the Vetric radios would have been only placed into service after that date, unless some were shipped with an AM medium wave receiver (as were those of the Los Angeles Police Department.)  It is believed that not many of the Vetric sets were purchased and that they were removed from service as the Motorola "Twin-V" cycle radios were acquired in 1955.  It can be seen that there was somewhat of a variety of equipment in use in the 1950's, with Avia and Vetric being the first FM equipment.   By 1953, Vetric was out of business and the original Link Radio, sold by Fred Link in 1950,  had gone into bankruptcy liquidation.  My reference to CHP use of Link-Vetric equipment is a 1949 dated Vetric manual which shows a photo of a CHP motorcycle equipped with a Vetric two way radio.  One of Vetric's largest sales had actually been to the Los Angeles Police Department, which used an equivalent radio, receiving on AM at 1730 KHz and transmitting FM in the 30 MHz region. These had replaced the LAPD's one-way receive-only motorcycle radios made by CEC Company of Pasadena, California in the early war years.

Interviews with CHP radio technicians employed in the Los Angeles region during this period failed to turn up any recollection of the Vetric equipment, so it is somewhat of a mystery how many units were purchased and where they were used.  It is also possible CHP purchased some of these prior to 1950 with a medium wave AM receiver in them, for use on the the original dispatch system.  If you should run across any photos of them in use, please let me know!  Episodes of the TV program Highway Patrol from 1955 show the Vetric radios in use, and it is known that some real CHP cars and motorcycles were used during filming, but it's unknown which were involved in these scenes.

Shown below is an unrestored, as-found example of the Link-Vetric head.  Views of these can be seen on CHP motorcycles in the TV series Highway Patrol from 1955, although it is not clear whether all of those cycles were prop equipment or whether any were real cycles used by CHP to assist during production. The metal bezel on top is where a small key fits, so that the equipment could be locked in the "turned off" position.  The microphone is a wartime RS-38 carbon style used on naval equipment, still made after the war for land mobile and aircraft radios. 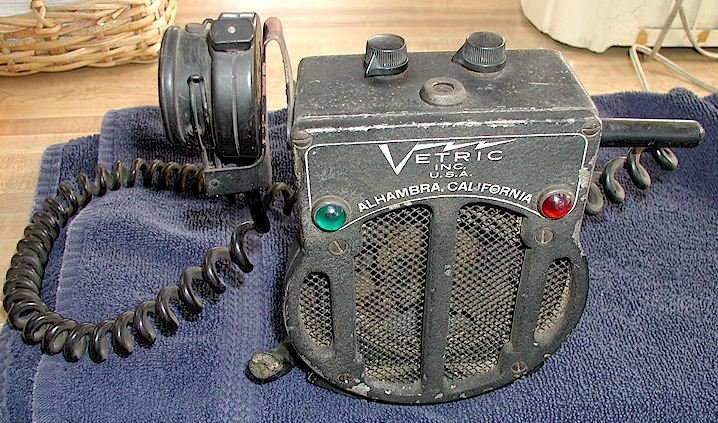 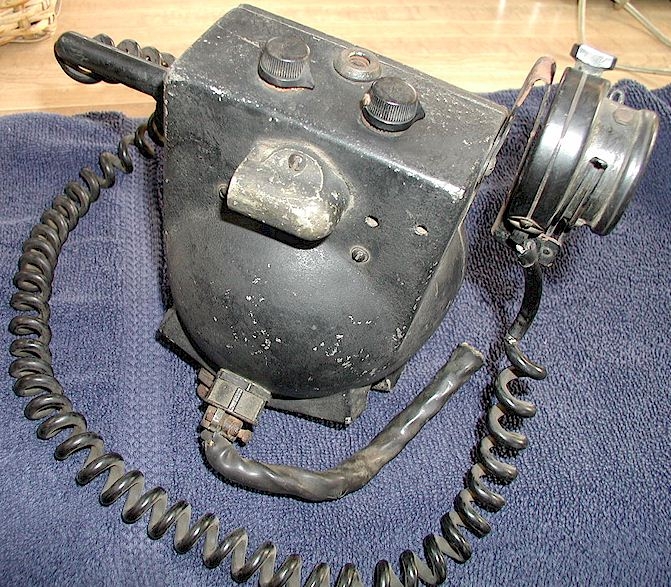 The first two way VHF FM motorcycle sets to be used by the CHP on a large, statewide scale were made by the Avia Corporation of Los Angeles and apparently initially delivered in 1951. Avia was a manufacturer of "photographic equipment" according to its manuals, and it is curious how they got into the police motorcycle radio business. All of the RCA one-way, Link-Vetric AM evaluation sets and Air Associates sets were taken out of service at that time. However, the Avia radios were regarded as flimsy and a disaster from an engineering and maintenance standpoint, breaking down almost constantly and requiring near daily attention. This is partially due to the construction of early police motorcycles, which had no rear suspension.  Standard periodic maintenance intervals dropped from weeks to days. The Avia design used tubes which suffered from poor socket retention. I have been informed that tubes would pop loose from their sockets and smash themselves under the vibration of motorcycle operation. This must have referred to the unshielded miniature tubes and possibly the 2E26 power amplifier tube, because most of the tubes are held in by shields. Technician morale suffered terribly from the maintenance headaches the Avia sets created. The Avia control box used a pushbutton switch hidden under the microphone hang-up clamp, which energized the transmitter's tube filaments when the microphone was picked up, in order to save battery power. The Avia control box is quite unique in appearance, as shown below (note-knobs are not original but close) and seems to have been the only postwar American motorcycle radio to feature a weatherproof horn speaker instead of a conventional paper cone type. Note that some Avia control heads were supplied with a black painted speaker while others had a dark silver-gray speaker.  The Avia control head shown below is from the Los Angeles CHP office; note that there should be a metallic foil decal around the knobs, but it is missing.  See the circa 1952 accident scene photo below, where it appears that the decal is also missing on that motorcycle's control head!  It's possible that the series of control heads used by CHP did not feature the labeling sticker for some reason.

Note that the microphone is a standard naval WWII radio mike called the RS-38, except with a coiled cord. 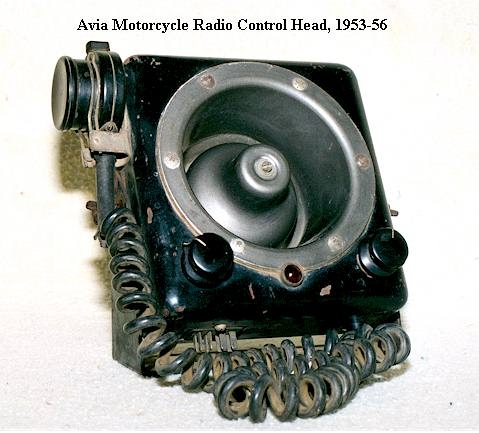 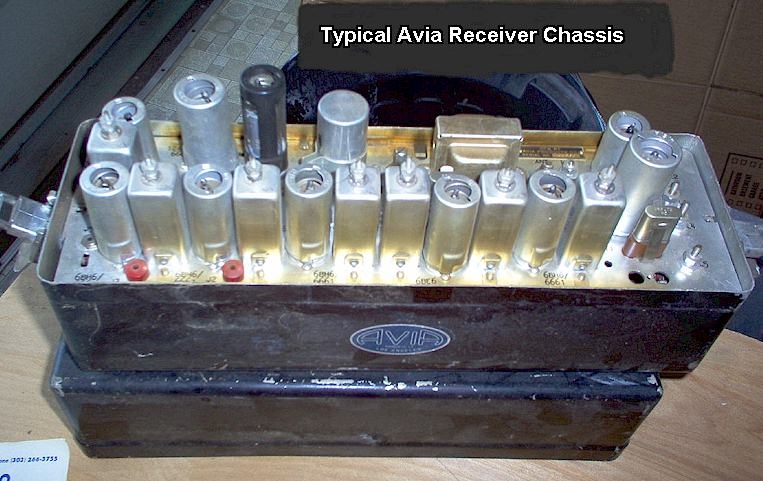 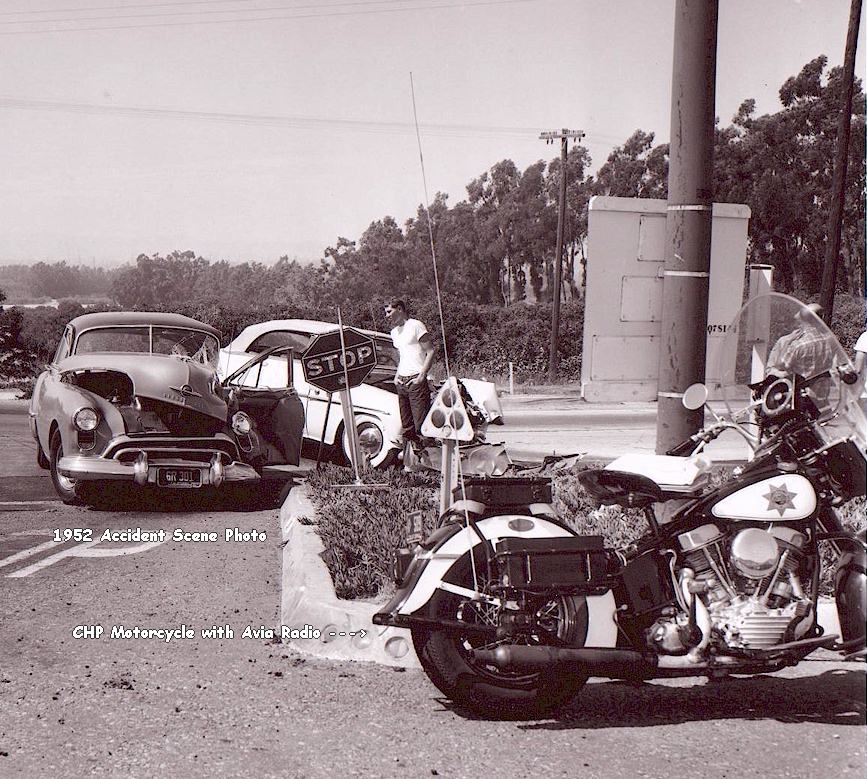 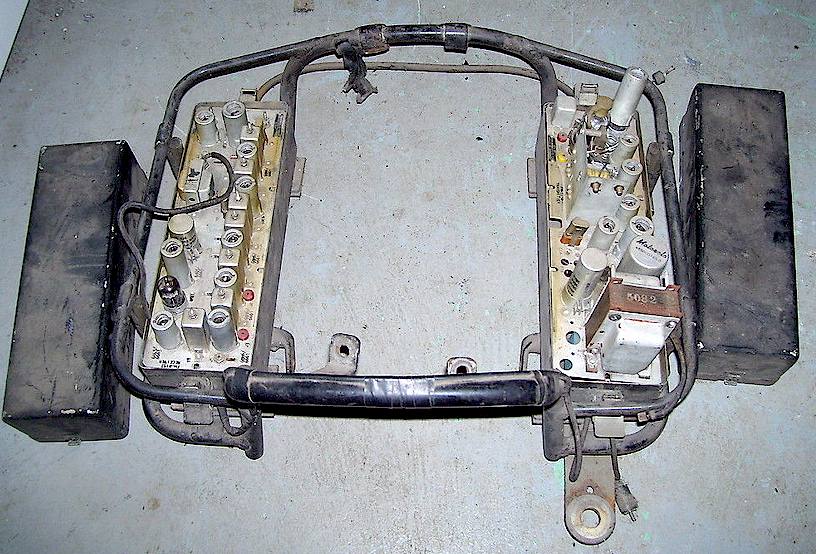 GO TO NEXT PAGE