The Motorola LTS 2000 is a late model handheld that is very similar to the GTX series.  One of the differences is that the programming uses different hex addresses for the assorted purposes of configuring the radio, than the GTX series does.  As in the GTX software, where the same package programs both GTX portable and mobile, the "LCS" software will program both the LCS 2000 mobiles as well as the LTS 2000 portables.  These instructions will convert a 900 MHz LTS to allow entry of 900 MHz ham channels.  It will not work on an 800 MHz LTS !

I wrote complete conversion instructions and posted them on the P25 "Communications Support" forums in April of 2016, however, without warning, that site went down in late June of 2016 and when it eventually came back up, software downloads had all been removed and it is now against the rules to discuss modification of software.  Consequently I have put the instructions here on my site so that they will be available somewhere. The moral here is to always print anything you need from a website when you find it, and download any software you find as well, because you never know when that site will disappear and you can't depend on anything being around forever.  Note that I do not have software available either for download or sale.

These instructions are going to be somewhat basic and for many people, a bit too elementary.  But my intention is to allow anyone to do this, regardless of their technical experience, and to save them the headaches it took me to figure out how to change the band limits to let the LTS and LCS series portables work on amateur 900 MHz frequencies.  I suggest that you locate and read the various web pages out there about opening the band limits on the 900 MHz GTX Series, because what we are doing here is the same, except that the LCS - LTS software uses different addresses in the mdf file to place the band limits.  Your guess is as good as mine why they did this, other than making you buy new software for every radio.

These instructions cover only the change of the band limits.  Done correctly, this does not change the checksum of the file and there is no need to mess with "unimportant" entries to get the checksum back to what it was originally.  There are some other features you can also change with this hacking, such as expanding the number of channels,  but I have not covered them here.

I use an original Motorola RIB box and a programming cable for the portables that is an old Polaris type that also does the GTX portable.  Ribless cables should work but you are on your own with them.  Using USB to serial adapters is often a failure, and again you are on your own there.  There will be enough issues just doing the basic conversion without wondering whether your PC, the cable or RIB arrangement is the problem.

You will need to buy the Motorola RSS software somewhere or get it one way or another, because Motorola no longer offers it. Note that there are several editions of Motorola RSS software for this radio.  Try to get the last edition.  The most common edition out there seems to be  RVN 4156B Ver. 2.00.1, however there have been other revisions, up to Ver. 2.00.4, which dates from 2000 +/-.   This can be annoying because if the radio has been previously programmed with a very late version, you will get the "Code plug too new" error message and then you are stuck, without the latest version of the software.     This is DOS software and to use it you need an older computer that will run DOS.  It does not have to be really slow.  I use an old IBM ThinkPad 560X laptop that runs Windows 95,  and to program radios I just have it re-boot into the DOS mode.  The advantage of having a Windows PC to do what needs to be done here, is that you can manage the files in Windows and only use DOS for the actual programming.  Also, you need a Windows PC to run the hex editor software.

Lately I have seen sellers on eBay offering Motorola original RSS in the factory wrap, which is not legal, but it seems to offer one route for those who do not care.  You will also need hex editing software.  Everyone recommends Hex Workshop, but I don't see why. It isn't particularly cheap and most of us will use it once or twice and never again.  Instead, I recommend HxD.  It's a free download and works just fine for our purposes.  However - - I was unable to get it to run on one of my Windows XP machines, as it would just crash each time.  So I used it on an older Windows 2000 machine, where it ran fine. You may not experience this issue, which I could not be bothered fixing.   Ideally, you could run it on the older laptop that you will also do the radio programming on, which should be a Windows 98 or older operating system anyway.

WHAT NEEDS TO BE DONE

Basically, all you need to do is change several entries in the file called LCS.mdf .   "mdf" stands for "Model Definition File."  When you install the LCS series software, one of the files you will see in this folder is LCS.mdf.  That is the one we will be modifying.  Make a copy of the original first and stash it in a different folder, or change the name to something like LCSold.mdf so that in case something goes wrong, you will still have the original file.

The changes I will show below open up the band limits to allow entry of amateur frequencies.  I am not going to waste time explaining hexadecimal notation or how you convert hex numbers to decimal, other than to say that in hex, there are more than 10 digits in the numerical system.  In other words, instead of 1-2-3-4-5-6-7-8-9-0  you have A-B-C-D-E-F added as well, which allows large numbers to be noted with fewer digits than the decimal method.  Note also that some other articles are preoccupied with writing hex numbers as, for example, 0x824 or 0x296.  You can ignore the 0x part,  as all that tells you is that the notation is a hex number.  If you look at the screen shot below, you will see that the column going down the left is the beginning address, and the row at the top is the "offset."  So, to get to address 008D4, (same as address 0x8D4) you would go down the first column to ...008D0 and then over four columns to Column 04, and that will be address... 008D4.  Note that the hex entries are also backwards.  You don't have to care, but if you wanted to see what the decimal equivalent is at address ...008D06, which is shown as C2, the actual hex value is 2C at that address.   And as the actual decimal number is two of the hex entries taken together, the previous one, 23, has to be reversed as well to become 32, and then your hex number to be converted would be 322C.  But to get your radio going on the ham band, you need not know or worry about all this.

You change the entries to that shown below and then save the file as LCS.mdf in the folder that contains the other LCS software.  That's it!

Remember that if you got the LCS software from the web, it is probably a copy of what someone had in their PC rather than the original installation floppy, and thus in a form that will make the files "read only" when you install it in your programming computer.  You can check this by looking at the files in Windows, going to "properties" and unchecking the "archive" or "read only" boxes for that file. If the file is "read only,"  a hex editor will be unable to change the entries on that file.

Below is an example of the screens of the LCS.mdf file before and after the values have been changed, read using the HxD hex editing program.

THE "BEFORE" HEX EDITING SCREEN 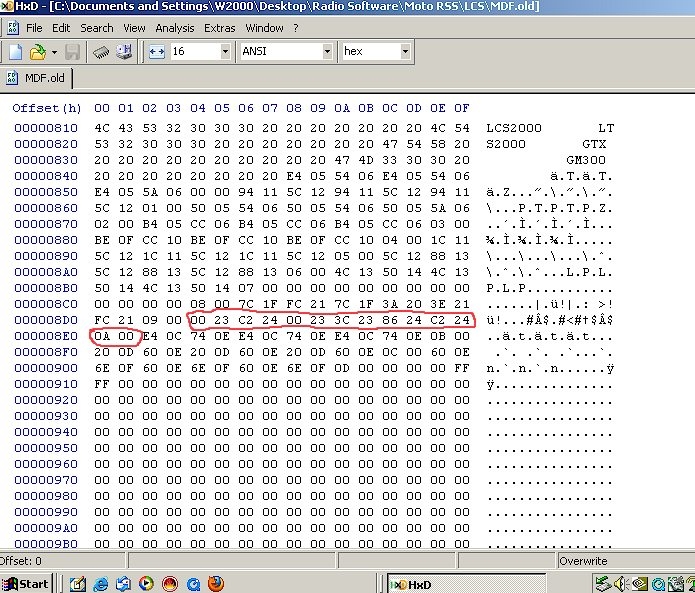 THE "AFTER" HEX EDITING SCREEN 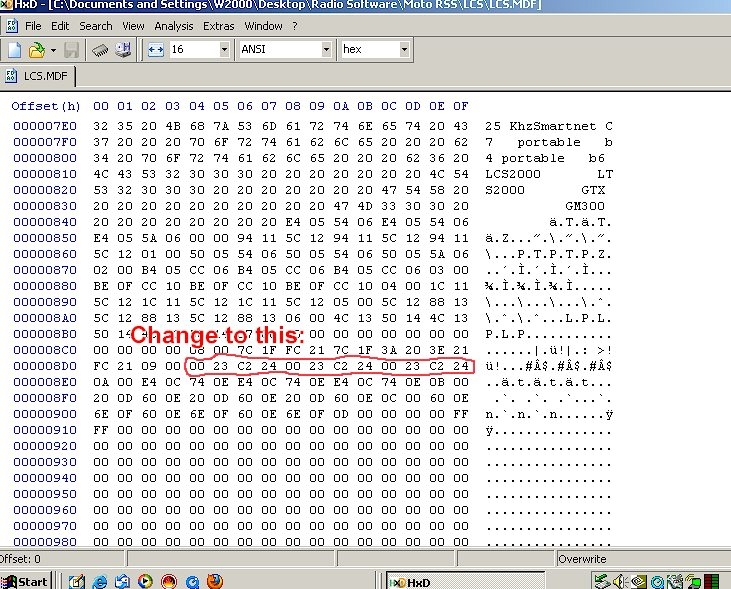