This page is an adjunct to my  pages on the California Highway Patrol radio system and consists of assorted miscellaneous photos of radios used by the police and highway patrols of other states and countries in various years, in no particular order, as well as larger fire agencies and federal government groups.   If you have photos of unusual radio equipment used by any state highway patrol or police or fire agency, I would be happy to add them here and give you credit.  I have avoided showing common, off-the-shelf models of equipment.  This page only shows unusual or specially made equipment.

NHP used these along with an assortment of conventional, non-scanning RCA 700 Series mobiles, in the mid to late 1970's, perhaps up into the 1980's, on a 42 MHz low band system.  They seem to have also used a wide assortment of other gear by Motorola and possibly GE during this time.  This same RCA 1000 head and drawer was also used by the Michigan State Police during the same time frame. 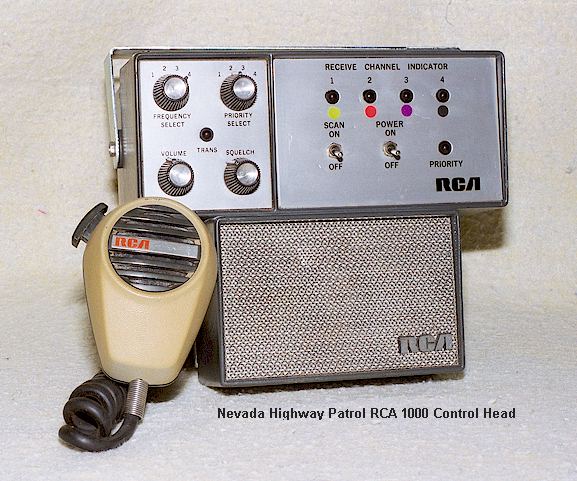 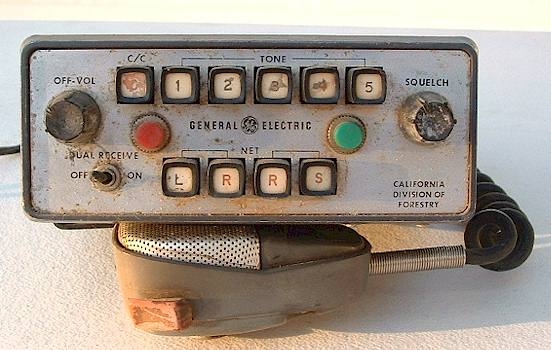 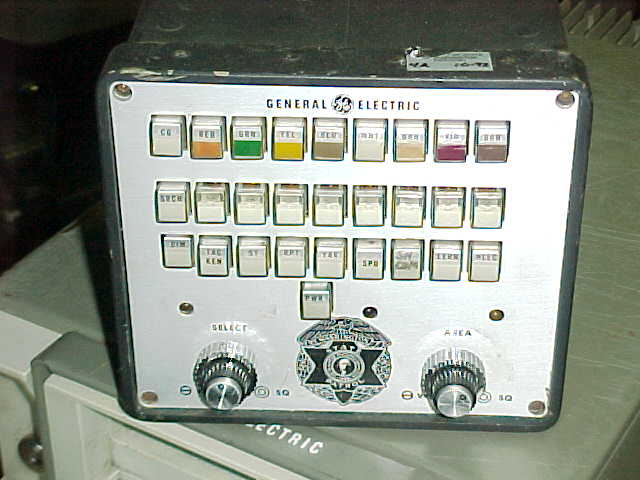 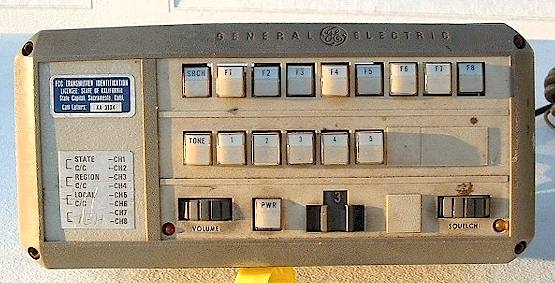 Head below believed to be early California Division of Forestry, for a Twin-V or "T-Power" mobile radio drawer:  Photo courtesy Bob Thompson 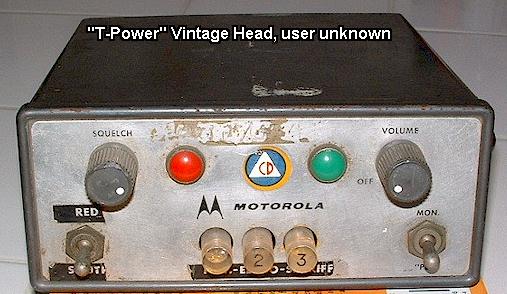 Motorola Multi-XFL VHF High Band Repeater.   This example was a federal government order for Bureau of ATF, circa 1970.. Uses HT-200 circuit boards, 166 MHz range.  Type of outer housing unknown.  The Multi XFL was made in VHF and UHF models, and in 5 and 15 Watt versions for VHF.  They were purchased as forestry lookout equipment, law enforcement special application gear, and by United Airlines as ramp equipment, among others.  Oddly, the Multi XFL never received a Motorola production model number and was always a Special Products Division item.    Some model numbers were: 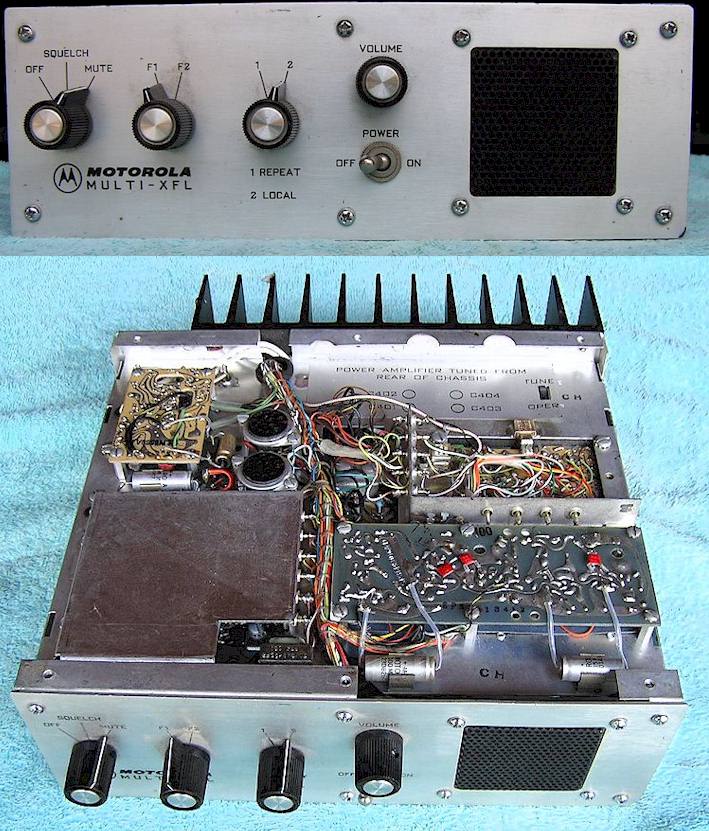 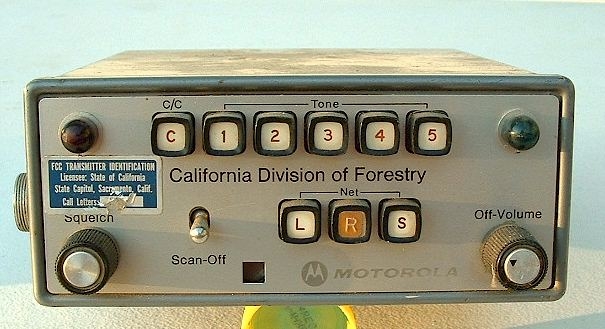 Washington State Dept. of Natural Resources - Dual radio control head.  1963?  Rear panel has a male connector as used on mobile telephones of the era, rather than a pin-socket panel as regular Motrac heads. 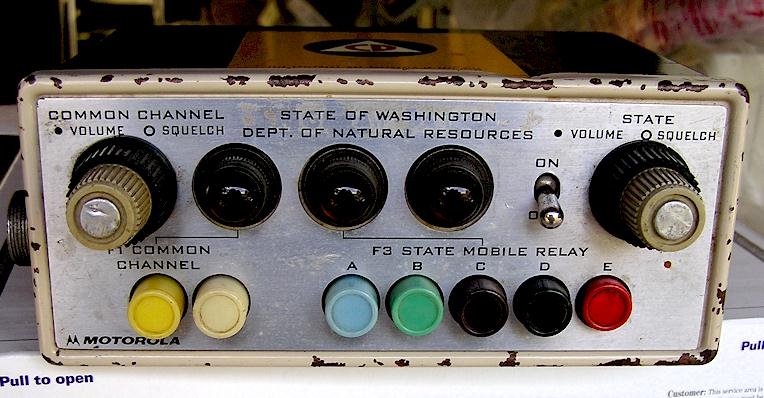 San Jose, California  Police -   UHF Radio.  8 channel with multiple PL tone capability, circa 1969. If it weren't for the date marked on this head by the factory, and that I have the matching UHF Motrac radio drawer, I would swear it was a 1960-62 era head for a special T-Power radio, by its appearance!  PL reeds located inside head. 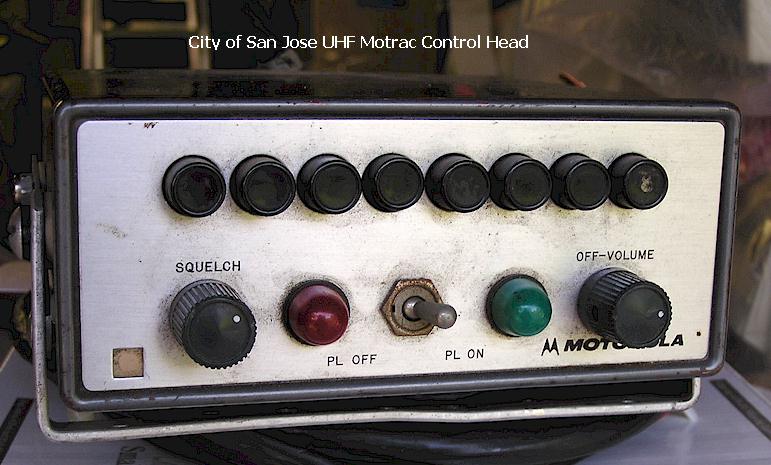 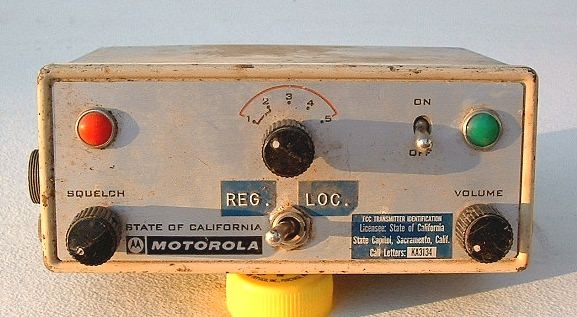 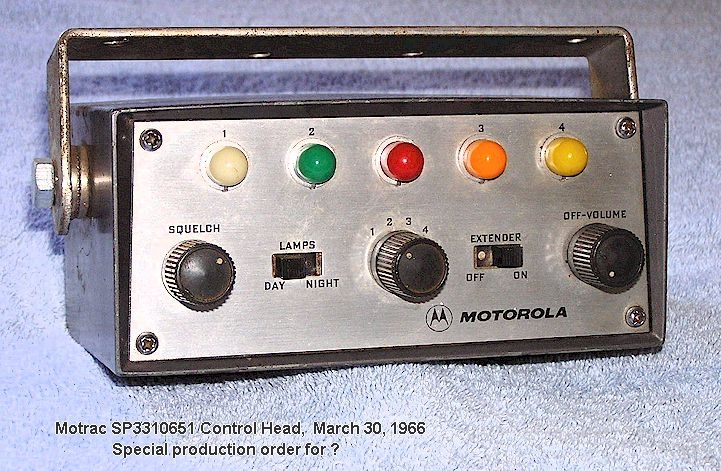 The above head has been identified as matching a low band 100W Motrac, type T71LHT, purchased approximately 1966 by the North Carolina State Highway Patrol in a relatively small quantity of approximately 200 units, as a replacement for some of the fleet of 1950's T51GGV series Twin-V mobiles.  These were in turn gradually replaced by GE MASTR Professional radios by the mid 1970's.

This is an XCN6005BG SP-? series head.  The original user is unknown, but the head appears to have been used with either a high band or UHF Motrac series mobile which had four channels and a choice of PL tones (the pushbuttons) and/or single-tone bursts.  The view of the rear panel appears to have a hole where a rotary switch was installed, perhaps to pre-set the tone burst frequency.  This head turned up on eBay in July, 2010 without any other pieces.  It is unknown what the "Disp" switch accomplishes. The description indicated sockets for six PL encode reeds inside.  The white disc under the Motorola logo is a light sensing window for a photocell which dims the pilot lamps at night automatically.  The 2552 Hz tone burst frequency is believed to have only been used by the State of California, so possibly this head was supplied to some state agency there. 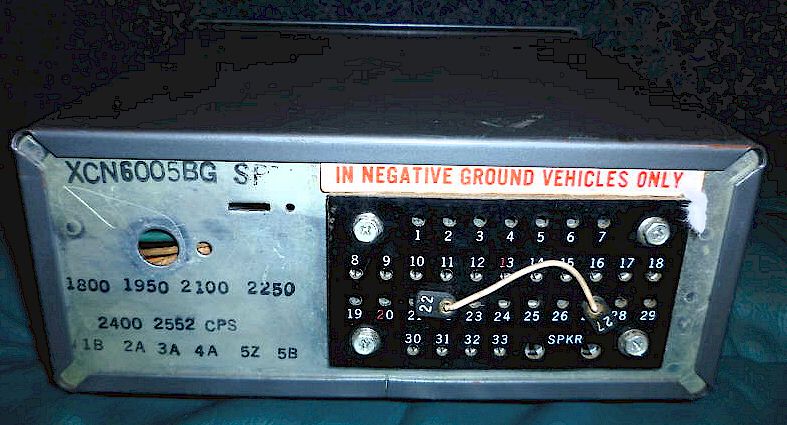 This example showed up on eBay in September, 2012 from an estate in Bronx, NY.  The original user is unknown. 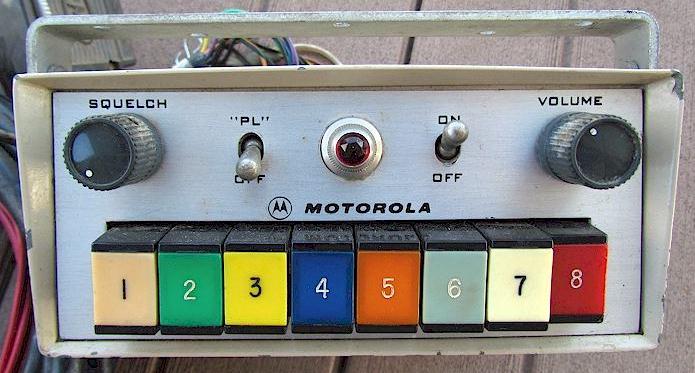 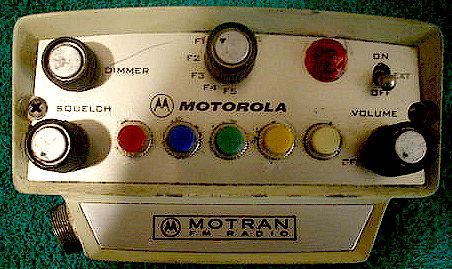 This was another variation of North Carolina Highway Patrol equipment heads. 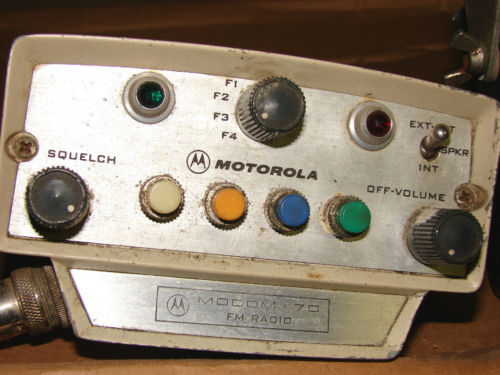 This appears to be an Illinois State Police Emergency Radio Network head, circa 1970.  Normally the microphones with these were red plastic.